This was an idea from a Jamie Oliver recipe, however it was changed and made up along the way to suit my pantry produce. It was delicious! Oh, and Jamie’s didn’t include beetroot, but I think the beetroot just made things more interesting, and lifted the flavour.

I wanted to have it in a hurry, so I parboiled the sliced potato and sliced beetroot for about 5 minutes. Then drain well. Meanwhile, I sauteed    the sliced brown onion with some oil, threw in some fresh rosemary, the tsp of stock powder, salt and pepper taste. I put the drained potatoes and beets into the frypan and tossed with the onion. Then transferred to a baking dish, drizzled over the cream and topped with grated parmesan. Baked it in the oven until cooked and browned on the top. 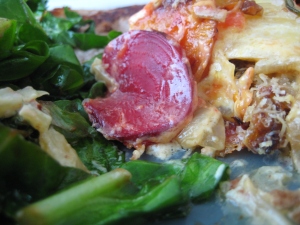 Beetroot and potato gratin on the plate 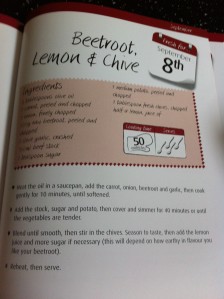 This is another Hugh Fearnley-Whittingstall recipe made by Charlotte using 5Acre beetroot . Looks divine and wish I had tried some. The colour is brilliant. Please see the photo for the recipe. Thanks Charlotte!

“One of my great loves is pickles. While I am trying to experiment with fermented pickles I am much more confident with the more common vinegar based ones. Two of my particular favourites are beetroot and eggs but both can often be overly astringent when you use just vinegar so when I saw this recipe I thought I had to try it.

I roasted my 5Acre beetroot instead of boiling them so I used water instead of the beet water but otherwise I stick to the recipe. The result is a much, much milder and sweeter flavour which I think would appeal to people who find pickles too strong normally and you get PURPLE eggs,who isn’t going to be intrigued by that?

These eggs and beetroots have been sitting in the liquid a couple of weeks, but if you eat them sooner the colour is more graduated as you cut through the egg.

The beetroot was from the farm of course and the eggs from our girls, while they aren’t technically from the farm they do enjoy the occasional bag of veg from the spares pile so in a way the eggs come from the farm at least a tiny bit.”